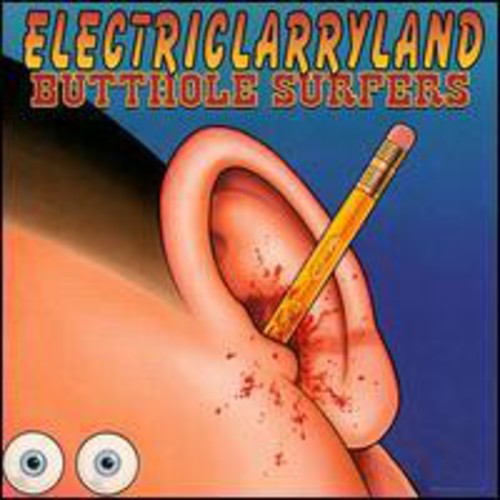 Austin's longtime favorites Butthole Surfers are back with a highly anticipated new album. They've been infiltrating the American public with appearances on Nintendo's TV commercials. They had a track on the Dumb And Dumber soundtrack. Their singer jams with Johnny Depp. They've been releasing albums since 1981 and have garnered a strong fan base. Put it all together and it spells "sales". Tracks include the first single/video "Pepper," "Birds" and "Cough Syrup."

''Electriclarryland'' is the seventh studio album by the American alternative rock band Butthole Surfers, released in April 1996 (see 1996 in music). This album brought the Butthole Surfers their first Top 40 hit with "Pepper". The album was certified gold by the RIAA on August 20, 1996.

The title of this album is a parody of Jimi Hendrix's 3rd studio album entitled ''Electric Ladyland''. This is the second time the band has used a parody title for one of their releases. The first was ''Hairway to Steven'' which references the song "Stairway to Heaven" by Led Zeppelin. The album's original title was going to be ''Oklahoma!'', but fearing lawsuits, Capitol forced the band to change the name.

The album was also released in a "clean" version with profanities removed and with an alternate album cover. - Wikipedia