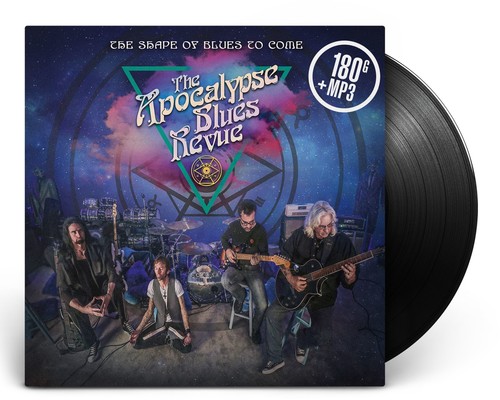 Shape Of Blues To Come "Have you heard the news? The apocalypse is coming, and it ain't your daddy's blues." The Apocalypse Blues Revue is back with their sophomore album, The Shape Of Blues To Come. While this may be a side project for a couple of guys from a tremendously successful mainstream metal act (Godsmack), it's also much more than that. There is a grand tradition in the pantheon of blues rock greats, that of the second album that literally defines a band: Led Zeppelin II, Beck-Ola, Mountain's Nantucket Sleighride, to name but a few. Somewhere there is a kid who has been listening to Godsmack, who will now come to know The Apocalypse Blue Revue, and from this revelation of the blues they will back pedal through time and space to discover the long and honorably trod path that leads to Robert Johnson, the Kings (B.B., Albert, and Freddie), all the way forward to the Doors and the British blues rock boom, which finally leads straight to today. Somewhere a kid will listen to this record and discover the blues and decide to pick up an instrument to play or to sing a bit, and we all remember that journey, right? This is one of "those" albums. The Shape Of Blues To Come is that rarest of beasts, a second album that is not just better than their first, but one that defines what the band is at this point, and one that points directly to where the band is going. The Apocalypse Blues Revue is here to stay! The Shape Of Blues To Come will be released worldwide on July 20, 2018 on Mascot Label Group's blues imprint Provogue Records. The vinyl includes a card for a complimentary MP3 download of the album.