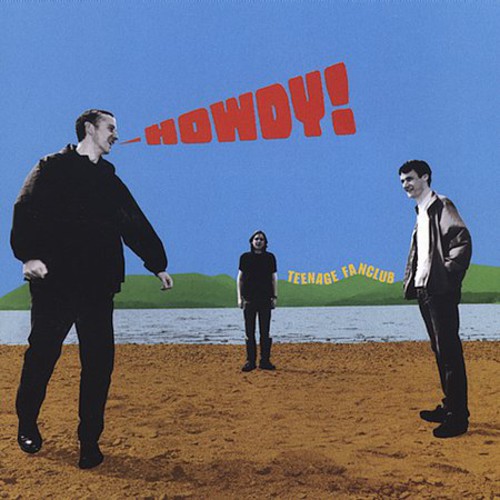 Scotland's Teenage Fan club offers their 6th full lenght album. Includes 12 tracks of pop guitar genius, inspired by Big Star and Badfinger. A Solid album that you only need to hear once to get into.

Eight years ago TFC raised eyebrows by abandoning their original dense DinosaurJr/Buffalo Tom-ish rock for the banging Big Star power-pop hooks of Bandwagonesque—asound they’ve refined since, culminating in such brilliant singles as GrandPrix’s “About You,” and Songs From Northern Britain’s“I Don’t Want Control of You” and “Ain’t That Enough.”Now on Howdy, the band has pulled-off a similarly deft shift, making mumla-la pop more akin to the ‘60s Hollies, Simon & Garfunkel, Love, andByrds. There isn’t a loud guitar anywhere, but there sure is a whole clusterof tickling, sensitively-picked, ringing folk-rock ones. With such a lighter backdrop,the three writer/singers’ three-part-harmonies and advanced composing andarranging skills are ever more to the fore. Fine!

With a “ba ba ba ba ba ba ba” and “I need an open heart to lookto/ Nobody sees the same way I do” nod to Pet Sounds Beach Boys, theLP launches with the glowing piano and organ-augmented “I Need Direction,”setting the tone for what is to follow. The mix of acoustics and hardly-noticedelectric on “I Can’t Find My Way Home” doubles the feeling. Thenthe group really seals the deal on “Accidental Life” and “NearYou,” two more to add to the TFC hall of fame. It’s because they oftenequal their old heroes (and because they’ve always been so friendly) thatthey’ve always been forgiven their nostalgic bent, and that’s the caseagain. Surely Crosby, Clark, Hillman, McGuinn, Lee, Hicks, or Nash would all haveloved to have written “Accidental Life” in their heydays. It’sa smooth, endlessly chiming, seesaw riff with bright, brilliant chords and oneof their most memorable melodies: “Now you’re looking for a way out/Of your accidental life.” It’s as wonderful as it is so oldie-familiar.

There’s plenty more near that caliber (“The Town and the City,”“Straight & Narrow”), but by then you’re sold anyway. MessieursNorman Blake, Gerald Love, and Raymond McGinley have done it again, and in a totallynew vein to boot. Sighing pure-pop classic? Sure. And finally in U.S. stores.