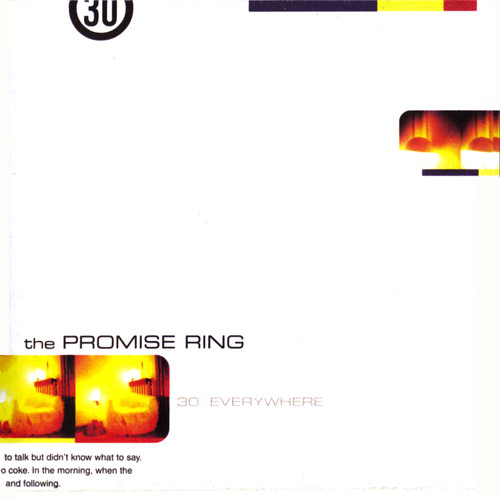 The Promise Ring were formed in 1995 in Milwaukee by guitarist Jason Gnewikow, drummer Dan Didier and bassist Scott Beschta. The band was eventually rounded out by frontman Davey von Bohlen, who at the time was a new enlistee into Midwest darlings Cap'n Jazz but gave The Promise Ring their crucial missing piece. In 1996, the group signed with Jade Tree and released their debut, 30 Degrees Everywhere: a powerful introduction that distilled the spirit and vigor of some of the members' punk and hardcore backgrounds and spit-shined it with von Bohlen's tastefully angsty melodicism. But 30 Degrees Everywhere is deceptively complex, masked by layers of driving guitars and buoyant rhythms. It's also deceptively dark, as the singer's heart-on-sleeve lyrics - tackling love, loss, regret and disappointment - and emotive delivery were hallmarks of The Promise Ring's genre-leading sound. This raw emotion, along with an overall lack of Polish, ultimately gives the album an endearing personality. You won't find perfect performances here; rather, you're getting real songs about real life played by real people in real time. Boiled down, 30 Degrees Everywhere is the foundation of a musical legacy, a lightning-in-a-bottle musical moment that demands listeners pay attention to it's urgency and passion - in the end, what more could you ask for?