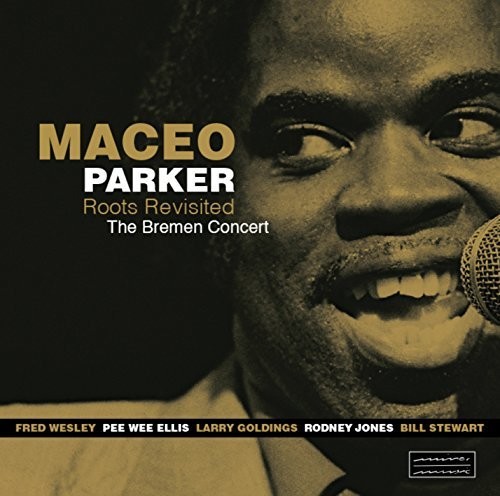 Live recordings are, by definition, a snapshot in time, a backbeat of memory, a droplet of adrenalin forever suspended in amber. But as part of a tour, the most enduring live recordings deliver an additional, broader context, summoning up the overall spirit, the predominant mood, the zeitgeist, of that group of musicians in the process of evolving a chemistry between themselves, as well as with their audiences. The Bremen Concert does precisely that. It celebrates 25 years since the release of Maceo Parker's breakthrough album Roots Revisited, which propelled him forwards - from a career as a James Brown and George Clinton sideman to influential leader in his own right - and back towards the music that he listened to growing up. This Bremen show is a definitive distillation of the band Maceo took out on tour after the album's release, a tour which connected him to a younger audience, encountering for the first time his music, his showmanship and his authenticity. The taproot of that band was the coming together of two generations of musicians. The elder (though absolutely not elderly, just older) were the three horns who had worked so often together in the James Brown bands - Maceo himself on alto sax, tenor player Pee Wee Ellis, and trombonist Fred Wesley. Their younger rhythm section came out of the New York jazz scene: Larry Goldings on organ, with Rodney Jones on guitar and Bill Stewart on drums. This recording, from November 1990, comes from the latter half of that tour, which mixed dates at smaller jazz clubs with a handful of festival appearances. Bremen fell somewhere in between, a larger venue holding around 800. The audience there was predominantly in their 20s and 30s, not a typical jazz audience, producer Stephan Meyner says. Shortly after the release of Roots Revisited, which had performed as well in Germany as in the States (where it had topped the Billboard jazz charts), they wanted to hear that mix of jazz and RnB, and funk.